I’ve been in love with animation since I’ve discovered it. I’m not sure how long I’ve loved Anime so i thought I’d follow my path of discovery. As I remember, here’s how it went. I didn’t know it was Anime or even what Anime was at the time but I started out with the following series. I’ll cover movies in another post.

There was no Internet in my childhood and barely any cable TV so the following I saw on regular television. I caught episodes when I could and often they were on weird UHF stations that I had to dial in. Just living life would cause me to miss episodes so I saw many of them multiple times before I’d see a new one.  Truth is everything was probably a rerun anyway but that didn’t get in the way of my enjoyment. From my point of view, they were all in English; I had no idea they were dubbed.

Speed Racer was probably my first introduction to Anime. What made Speed Racer great was that he was a normal guy who could get hurt. He had one real skill which was driving and he had to work at that. While everyone in his crew had some kind of talent, the Mach 5 was the co-star. I used to be able to tell you what each button on the steering wheel did. Now I’d have to look it up. Some of my favorite episodes included the fake Mach 5, Racer X taking off his mask and the GRX. The series is currently available on Hulu. 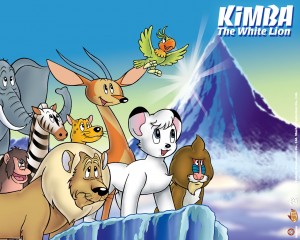 Kimba the White Lion – This was the original Lion King. He was destined to be King of all the animals if Africa but I’m not sure he ever really knew his father. I’ll have to go back and take another look at the origin story. I remember that someone actually taught the animals to talk. They weren’t just talking because of TV magic. They had at least one human friend, I think his name was Roger. There was no real technology here, just Kimba learning how to be a great leader like his dead father against impossible odds. The series is currently available on Hulu.

– I saw this in Black and White and I wasn’t sure if it was because of my family’s television or because that was the way it was made. This was my first giant robot I think. Humanity’s savior controlled by a boy. You would almost think Gigantor was secretly intelligent though more on the level of a puppy. Regardless of the danger, Gigantor kept the boy safe and even let him ride in his hand while flying. I remember the controller seemed to only have two levers but that was all the kid needed to get Gigantor to do just about anything. I also remember part of the song,”bigger than big, stronger than strong, fighting for what’s right, against wrong.” Currently you can find this series on Hulu. 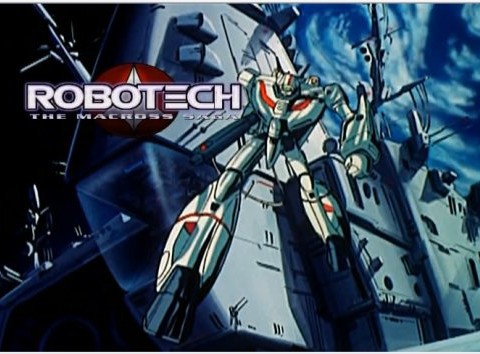 Robotech/Macross – My introduction to Mechs and Anime drama was Robotech. Much later I found it was part of the MACROSS saga. Truth is this was impossible to properly follow at the time because it was so serialized and if you missed episodes there was no telling when you’d see what you missed. I liked it anyway. It seemed to have a deeper story than most of the stuff I was watching, more sci-fi,  and the action was great too. There were multiple series but you can find many of the episodes on Hulu. 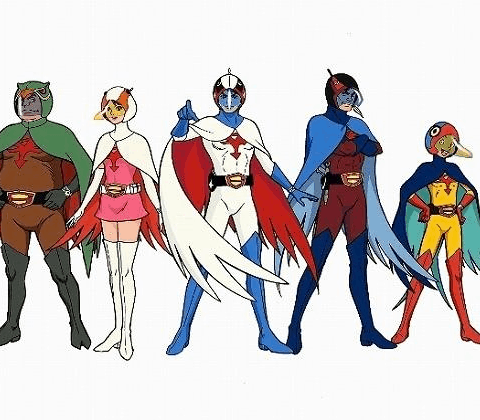 Gatchaman/G-Force/Battle of the Planets – I knew them as G-Force initially and they were what the Power Rangers should have been. They were Ninja fighters in bright colors that fought evil invaders from other worlds. They each had their own vehicles that matched their personality and somehow connected to their powers. I think they had enhanced strength and agility when they activated their powers but they were no slouches either way. I remember one of them was fat and another didn’t speak any earthly language and when their powers combined on their main ship, the ship became a fiery phoenix. Currently you can find the series on Hulu.